As every songwriter knows, one of the basic requirements of the job is to get the hell out of the leafy suburb of Clichéville, where everything is familiar and has been done before.

The trick is to make it new.

A few writers do that by creating their own peculiar imaginative universe, a parallel world which bears a resemblance to the reality we all know but is also different and strange. Gillian Welch and David Rawlings do that, as does Tom Waits. And this week’s Friday songster CW Stoneking. 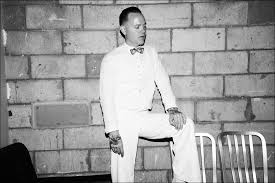 Nothing about Stoneking is straightforward. He was born and raised in Australia but is steeped in American musical history. His songs and productions draw on early blues – his first love – but also hokum, ragtime, jazz and the yodelling country songs of Jimmy Rodgers. Born in 1974, Stoneking sounds as if he belongs in the 1920s and 1930s, with a voice as gravelly and rough as that of an old bluesman,  and yet on stage he is pale, dapper, with a neat 1950s style, Brylcreemed hair and a small bow-tie.

These contradictions may sound absurd, possibly slightly bogus, but they produce songs that are utterly distinct, conjuring up an exotic world in a manner that is both funny and edgy.

‘Jungle Lullaby’, from the 2008 CD Jungle Blues, is one of his best songs. From its opening,  the scene is set.

‘It was deep in the jungles of Africa,
Where the bugs is thick as fleas,
And the heat will drive sane men crazy,
And the water’s full o’ disease…’

This is Heart of Darkness country  – dark, shadowy, humid, full of danger  (There was bird-eatin’ spiders, big as my fist,/ Snakes that hung down like vines/  And eyes that watched as we drifted along) –  and is probably set some time in the past (there’s a reference to an Officers Club). The rhythm of the song suits its I’m-going-to-tell-you-a-strange-story theme, but what is going on in the background from the Primitive Horn Orchestra comes straight from a jazz funeral in New Orleans.

The story is gliding along, like a canoe down a croc-infested river, when something unexpected happens to the music. Out of the murky swamp, the air clears and suddenly we’re in the warmth and safety of a fantastic, old-fashioned melody, as sweet and seductive as anything written by Hoagy Carmichael.

‘Singin, swingin,
On a lazy afternoon in paradise.
Croonin’, swoonin’,
That old time song, where the days are long,
It’s a jungle lullaby.’

Jungle Blues is a startlingly original CD. Each of its ten songs – or rather, nine songs and one story  – is distinctive and yet belongs with the others. Geographically it’s all over the place. One moment we’re in the tropics  – deep in the jungle, there’s also a tall tale about a talking lion and a monkey judge. Then we’re in the West Indies with a brilliant cover of  ‘Brave Son of America’, a 1947 tribute to General MacArthur written by the ‘King of Calypso’ Wilmoth Houdini. There’s a blues song (sung by  Kristy Fraser) which could have been lifted from Bessie Smith album, and then we’re back in New Orleans with the spooky ‘I Heard the Marchin’ of the Drum’ and a wonderful tale of bad hoodoo called ‘The Love Me or Die’.

With its dangerous, strange story-telling in song, connected by magic and death, Jungle Blues is almost a concept album. As to what that concept is, probably only CW knows.